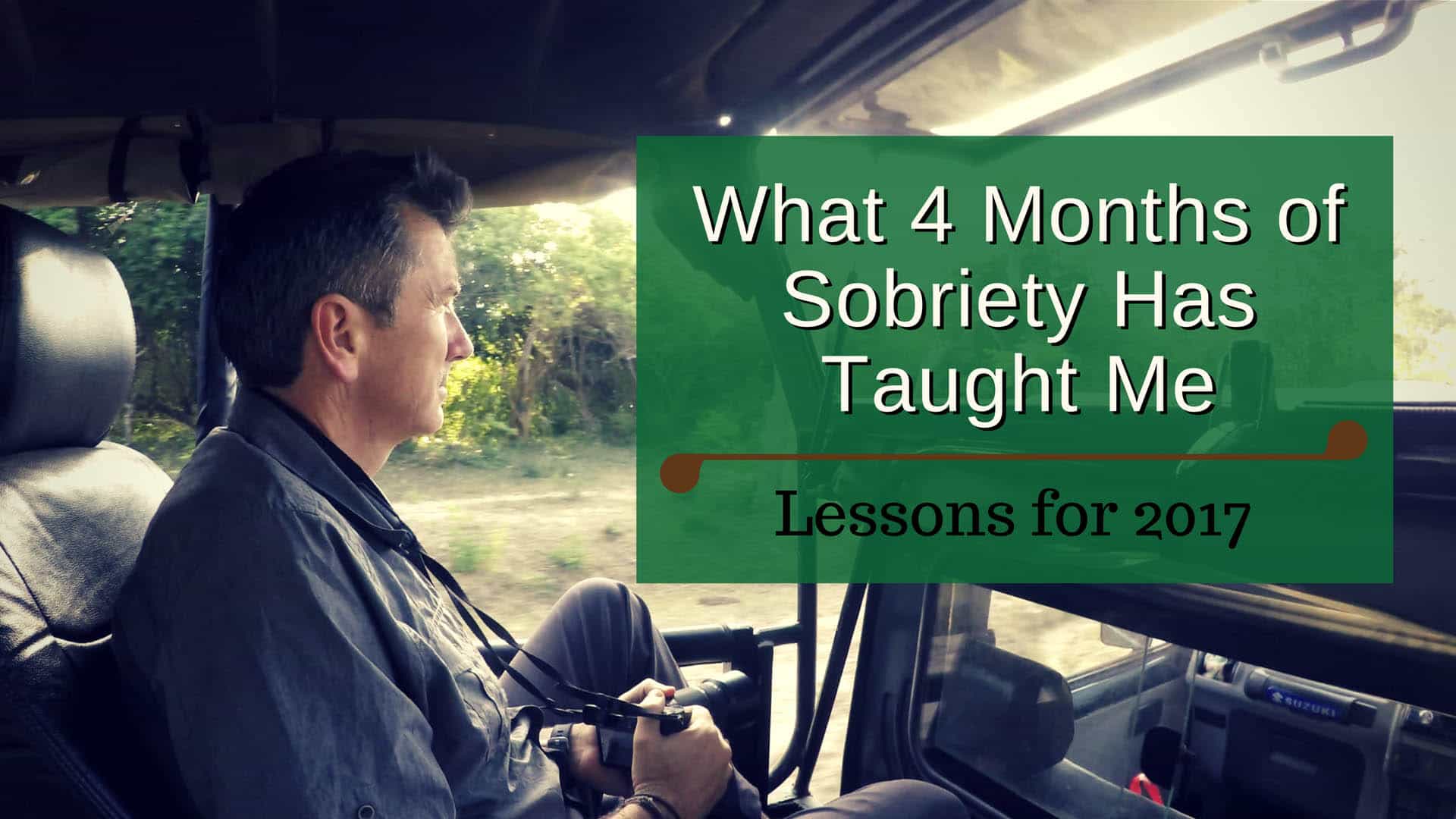 August 31, 2016. The moment we arrived in Toronto, we opened up our calendar and started filling it with meet-ups with our friends. After leaving Toronto for good almost two years ago, it was time to renew ties. Every night, we would meet up in a bar or at a friend’s house to celebrate and to catch up. Every morning, I would wake up feeling like shit – tired, stiff and unmotivated. “Why did I have to drink so much?” I would think to myself. Then I realized I had less than eight hours to nurse this hangover because I have to catch up with another group of friends again later that night. sobriety

Over the course of the six weeks, we were in Canada; this was our routine. Some nights, I’d only have a couple of beers, while other occasions it would be a huge night of beer, wine, and rye and cokes. The biggest problem for me is that I don’t do moderation very well. I can’t just have one drink. The same goes for salt, sugar, and caffeine. That’s how I’m wired; once I get started, I don’t stop. I was able to get away with this in my twenties and thirties, but now that I’m in my late forties, it has finally caught up with me. Recovering from a night out now takes at least two days. sobriety

Our last visit home took its toll on us. We over-committed our schedule, instead of enjoying quality time with our friends. Dorene and I both agreed that when we got to India, we would take a month off drinking to give our body a break. I’ve taken many “breaks” before from drinking, but this time it would be different. We were doing it together during our travels in India, so the lack of peer pressure and distractions in a country with a limited drinking culture was the ideal situation for a one-month cleansing.

Coincidently, an email from our friend KC Carter arrived in my inbox. He was launching a new course called The New Sobriety. The program included a 30-day challenge to avoid alcohol. The timing was perfect, so I signed up. Each week, KC shared his insights on sobriety and how it impacts relationships, work and the change we want to create in the world.

This Was When Things Started to Change

Over the next six weeks, I committed to the challenge. Two weeks in, I began to notice how good I was feeling. This wasn’t a surprise, and I paid close attention to how it affected my day-to-day life. I asked myself why I wouldn’t want to feel this way all the time. I slept better, I had more energy, and my head was so much clearer, especially during my morning meditations. Apparently, meditating is easier when you’re not hungover! By the end of the fourth week, I shed 20 lbs (9 kg), simply by eliminating the booze. I wasn’t ramping up my workouts in any way. In fact, I was working out less due to the pace of our Indian travel schedule.

Listening to my Body

My vice is beer. There is nothing better than an ice-cold beer at 5:00 pm to wrap up my work day. This routine was perpetuated by living in different countries the last two years, where beer is cheap and often sold in 750 ml bottles. How awesome is that! I kept telling myself, “I’m just having a few bottles each night, that’s not much.” Little did I realize the impact this habit was having on my body. sobriety

Over the course of a month, I consumed close to 25,000 calories alone of just beer. If you throw in a few salty snacks to satisfy my late night munchies – and this calorie number went through the roof! I also noticed a significant drop in my resting heart rate. Before I took the 30-day challenge, my RHR was around 66 beats per minute (bpm), and by early November it dropped to 60 bpm. I couldn’t ignore my body; the signs were right there in front of me, and it was time to do something about it. I decided right then and there: I wouldn’t drink during the duration of my trip to India and Sri Lanka. I planned to be off the booze for four months. CHALLENGE ACCEPTED!!!

Dealing with the Mind Games

You have to decide what your highest priorities are and have the courage—pleasantly, smilingly, unapologetically, to say “no” to other things. And the way you do that is by having a bigger “yes” burning inside. The enemy of the “best” is often the “good.”

This quote was shared during the sobriety course, and it was a huge wake-up call for me. I was settling for “good,” as in good enough, instead of going after my “best,” the best life I can create. Drinking is a stress reliever for me, and it’s been the center of fun in connecting with my friends, but it was holding me back. I was self-medicating. I was using alcohol to be more relaxed and become a carefree version of myself. BUT, this was only an artificial solution. Deep down, I always knew this, but I never had the courage to face it until now. It was preventing me from growing into the person I wanted to become.

I also realized how much courage it takes to stop self-medicating and to avoid alcohol. We live in a pretty fucked up world, and it’s easy to get wrapped up in all the bad news that streams through our Facebook feed. Who wouldn’t want to escape that? Dorene and I have created an amazing life together, and It would be a complete waste to not live out this dream to its fullest. Nothing is a more obvious example of this than our experience traveling in India for the last three months. We were both completely present during our entire visit, and our feelings and emotions were heightened by it. Because of this, it has been one of the best experiences in all my years of travel.

I’m just over three and a half months without a drink, and to be honest; it’s been easier than I thought it would be because I’m so focused on the benefits. My number one priority for 2017 is health and wellness. Everything around me is changing for the better. My productivity on our business has increased, and I have so much clarity and focus going into the New Year, and I’m fired up to do more!

Fitness- I’ve lost close to 30 pounds (14kg), and I’m at a weight which I haven’t been in years. With all this extra energy, I plan to take my fitness to the next level. Last year, I talked about running a marathon. So far, our schedule hasn’t worked out where I’m in a place that is long enough to train properly. But I plan to start training as soon as we get settled in Colombia in mid-February where we’ll be living until July.

My Diet- When I start to feel good and notice positive changes in my health, I tend to make better choices about what I put into my body. Another influence was our time volunteering at an animal recovery center in India and learning more about animal cruelty around the dairy industry. Now I have two important motivations to make better choices when it comes to food. So adapting to a more plant-based diet is where I’m heading this year. Fortunately, reducing meat from my diet is easy in India because of the many delicious vegetarian options there. I still need to work on my dairy and sugar intake; the chai tea in India was very addictive!

Mindfulness- I’ve been meditating off and on for the last 10 years. I never quite grasped it as a daily practice, until now. Since I’ve cut out alcohol, I’ve replaced it with daily meditation. Each morning, with a clear mind, I spend 15 minutes getting focused for my day. This practice has been a game changer for me, and I look forward to improving on this into 2017.

Gratitude- Practicing gratitude each day has helped me immensely over the past four months. Journaling is something I’ve always struggled with. Back in August, I bought The Five Minute Journal, and it changed everything. I start and end every day appreciating the small and big things. This has not only helped me stay off the drinks, but it also reminds me each day how lucky I am to be living this incredible life with Dorene – a life of traveling, living and working on projects that share our values.

Will I Drink Again?

I’ve been thinking about this a lot lately. When will I have my next drink? Can I learn to drink in moderation? Honestly, I have no idea. I’m giving myself permission to have a drink or drinks when we leave Sri Lanka, but I’m not sure if I want to. This started out as a “simple” 30-day break that turned into a four-month exploration into sobriety. I am however becoming more and more curious what my life would look like without alcohol. What else could change?  I can’t wait to find out.

If you are looking at taking a break from the drinks, even if it’s just for 30 days, KC is offering another round of The New Sobriety starting this October 2017.

What is your experience with reducing or taking a break from drinking? We’d like to hear about it.