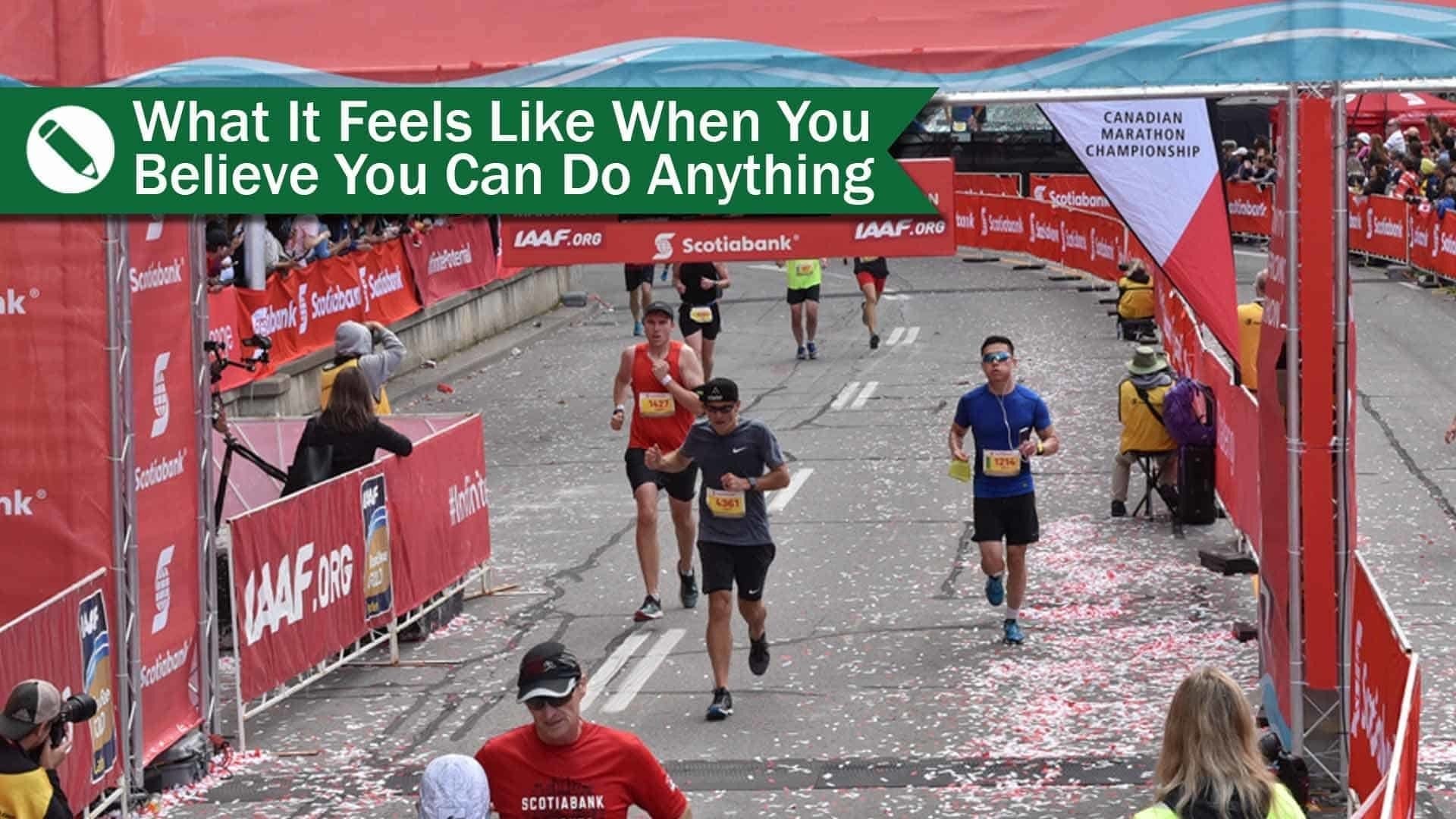 Have you ever gotten to the point when you believe you can do anything?

It is that point when you think you can accomplish anything you set your mind to, especially those things that seemed utterly impossible before.  It is where the advance of age, the absence of skills, or physical condition no longer matter.  I have been lucky to feel this way, and it was awesome. It has also paved the way to a lasting, enabling attitude to do more.

My story of getting into the best health of my life at 48 and running my first marathon.

The last 12 months has been a very transformative time in my life. I made the choice to step away from the drinks and focus on my health. In October 2016, I decided to take a break from drinking for 30 days. After the month had passed, I decided to challenge myself and continue for an additional three months. This particular time period was by far the longest I had ever gone without drinking. What was going on within me and my body couldn’t be ignored. I shed 25 pounds, I slept better, and my energy level went through the roof. So, one more month wasn’t going to hurt. Challenge accepted! That month went by, and I started thinking about going the whole year. What would that look like? Is that even possible?

It was January 26, 2017, and Dorene and I were traveling in Ella, Sri Lanka. The thought of going without alcohol for a year was racing through my head, and I was trying to figure out a way to achieve it.

What if I gave myself the ultimate challenge at the end of 12 months?

But what could that be?

We had two weeks left in Sri Lanka before we were heading back to our home base and one of our favorite places to live; Medellin, Colombia. I was also looking forward to getting back into a regular workout regimen again, especially after three months of traveling through India and a month in Sri Lanka. The one thing that was always consistent for me when we were living in Medellin was going to the track every morning to run. So, I knew I would be getting back into a running routine as soon as we return for at least the five months we would be in Medellin.

The track in Envigado

This was plenty of time to train, but train for what?

The summer before we left Canada, I signed up for a 6-week running camp to learn how to run correctly. Some of the people in the camp were training for a marathon, and I thought that was pretty cool. I would love to do something like this, but with our travel schedule, I didn’t think it was possible. Out of curiosity, I happened to Google “Toronto Marathon, ” and the 2017 Scotiabank Waterfront Marathon came up. I opened the page and October 22, 2017, jumped out at me. This was the answer I was looking for – the Toronto Marathon would be the ultimate challenge and motivation for me to forego drinking for one year. Conveniently, I could also combine it with a family visit home to Canada.

That very moment, I clicked on the register button without hesitation, and was committed.

On February 16, 2017, we arrived in Colombia and my seven months of training began: five months of high altitude (1600 meters) running in Medellin; a month in the US and Canada; followed by the last two months in Nicaragua, during the rainy season with sweltering 30+ Celsius heat. Toronto was a flat course, and the October weather would be the perfect condition for me at 15 to 20 degrees Celsius. I was thoroughly committed to my running schedule and never missed a run despite the intense heat, high altitude or work commitments.

When I arrived in Toronto on October 15, a week before the race, I was ready.

The morning of the race, I was extremely nervous. My mind wouldn’t stop racing as the inner dialogue of self-doubt settled in. What if I can’t finish?What if I get hurt? What was I thinking running a full marathon?

By the way, I forgot to mention, this was my first race.

​ Leading up to that day, I had never run a ½ marathon, 10K or 5K. To top it off, I downloaded my training program off the internet and my personal trainer was an app called Runtastic. I honestly had no idea what I was doing at the start line as I stood there with thousands of other runners. The guy next to me was stretching his quads, so I started stretching my quads. The girl to my left was jumping up and down, I assumed to keep her legs warm, so I started jumping up and down. I had no clue.

At 8:45 am, the start gun went off! The first corral of the elite runners started the race. I was in the second corral scheduled to begin at 8:50 am. Me and 5,000 other runners who made our way to the start line.

On my way to the start line… Look for the scared guy in the grey shirt, black hat and #4361

Within minutes, I was running my first marathon!

The next 4 hours can only be described as a rollercoaster of emotions. I know it’s a cliché, but it’s true. I trained my ass off for seven months, and it was time. At the first kilometer, I became very emotional, tearing up as I made my way up University Avenue. Realizing that crying is probably not the best approach to racing, I pulled myself together and found my groove. The next two and half hours were incredible; I was on top of the world!

Just past the half-way mark and still feeling good.

Before the race, I found a place on the course map where I wanted Dorene to watch and cheer me on. I picked this spot because it was at a latter part of the race and I would probably need to see a familiar face by then, especially someone who knew how hard I trained and someone who encouraged me from the beginning. She recruited a few other friends to come and cheer me on.

I passed the 27-km mark and made my way down Eastern Avenue. I could see Dorene off in the distance, along with our friends Liz and Simon. A couple of hundred feet later, my friends Brian and Swin and their little guy, Gus, cheered me on, which was exactly what I needed as my legs started to slow, and I new it was only going to get worse. The dreaded last 10 kilometers that everyone talked about was quickly approaching.

Our friend Mary ran her first Marathon a couple of years earlier and reiterated the challenge of the last 10 km, and she wished she had someone there to help her through. She offered to be there for me and even run alongside to keep me motivated. I took her up on her generous offer, and she agreed to meet me in the Beaches neighborhood, the last long stretch of the course.

The run through the Beaches was extremely tough – 31 km to 35 km where you make the turn and start heading back downtown to the finish line at Toronto City Hall. I could feel my legs starting to really slow down and, for the first time, I was in pain. However, the crowd at this stretch of the course infused some inspiration into me. Thousands of spectators cheered on the runners. I passed the 34-km mark and made the turn onto Woodbine Avenue. A hundred meters later, a sharp pain shot up my right quadriceps and another shot down my left calve which forced me to stop.

For a moment, I couldn’t even walk. I just stood there thinking my race was done.

All I could think about was the last seven months of training wasted, and the thought of limping back through Eastern Avenue past my friends was killing me. I never experienced cramping like this before, and I had no idea what to do, other than walk. One of the volunteers came by on her bike and said to keep moving and try and massage them out, which somewhat relieved me from pain and enabled me to start moving with a slow jog. I looked down at my watch: 3 hours and 10 minutes had passed.

When I first decided to run the marathon, I set my time goal pretty high. I wanted to run less than 4 hours through the race. For most of the race, I was pretty confident I was going to reach that goal, until that point. I had less than 50 minutes to run 7km, and with my legs feeling the way they were, I was not too optimistic.

As I approached the 37-km sign, I could see Mary waiting for me. She’s also a doctor and understood what I was going through and assured me I was going to be okay. We stopped at the next watering station, and I downed 4 cups of Gatorade to rehydrate. We made the turn back onto Eastern Avenue, and I was starting to get my legs functioning again, as I approached Dorene and my friends. For the next 3 km, Mary ran alongside me as my personal cheerleader, and it worked because I was getting my pace back and confidence at beating my 4-hour goal!

Running with my friend Mary near the end of the race..

With 1 km to go, Mary and I said our goodbyes. It was time for me to finish, making my seven months of training worth it all. As I made my way up Bay Street, approaching Queen, I could see the finish line and with 200 meters to go I looked down at my watch, it just passed 3:57:00.

So, what was the point did I believe I could do anything?

It was all the steps that brought me to this point that I have never accomplished before:

– Challenging myself to a major health goal –  No drinking for a year.

– Signing up for the race and committing to it.

– Training meticulously for seven months despite the less than ideal running conditions.

– Not caring that I have never even run a race before.

These goals would never have been accomplished without making conscious life redesign choices. For more posts about our life redesign, you can find them here.

What about you, have you got to the point that you believe you can do anything? We’d like to know.