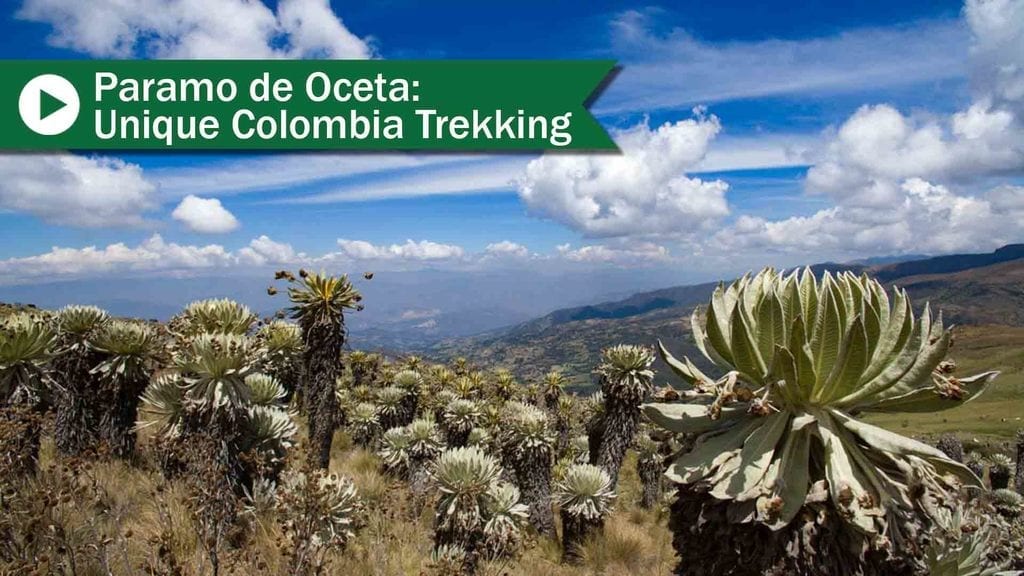 Don't forget to click on the video above first!

We had no idea what a Paramo was before we visited Colombia. Of course we understand Ecosystems -- like Tropical Rainforests,and Coastal regions and believe it or not, Colombia has 81 different ecosystems, the most in the world.

However, high in the Andean region in Northeast Colombia lies a unique and uncommon ecosystem and the home for some out of this world, unique and Epic hiking opportunities.

Paramos aren't common that's why you may not know what it is. A Paramo, (in Spanish Páramo)  is the most biologically important and most unknown ecosystems in the world.

These high elevation areas are over 3000 meters high and feature sponge-like soil, unique vegetation, wet grasslands, lagoons, and lakes. These areas act as a flood buffer in the rainy season and create a steady source of water during the rainy season.

These ecosystems supply 70% of the water to Colombia and fortunately it's the one ecosystem that has been protected by law from mining, and oil and gas excavation.

Colombia has many Paramos in it's high elevation areas in the country, slowly they are becoming known to hikers and travelers such as the  Sierra Nevada de El Cocuy National Park (also known as Parque de Los Nevados), or Chingaza National park near Bogotá, or the Paramo de Belmira in Antioquia a few hours from Medellin.

However, the Paramo rated the most beautiful isn’t one that gets the same kind of fame as El Cocuy and as a result, it is one of the most preserved of all the Paramos.

Considered the most beautiful is the Paramo de Oceta found in the eastern range of the Colombian Andes in Boyacá, Colombia.

The Paramo de Oceta is found at altitudes between 2,950 meters and 3,950 meters. It covers parts of the municipalities Monguí, Mongua, and Tópaga, belonging to the Sugamuxi Province, Boyacá.

Why Hike at the Paramo de Oceta? First, it is virtually undiscovered, and there are so few hiking up in this area. The location is unspoiled, and the views (check out the video!) are impossible to describe.

The most interesting vegetation is the Frailjones – a perennial shrub – that has a flower that looks like sunflowers and soft hairy leaves.   It captures water vapor from the air and passes it into its spongy trunk and into the soil.

During your trek, you will also see condors, eagles, and if you are lucky deer, foxes, owls, and lizards that are native to this area.

How to Get to the Paramo de Oceta

We took a bus after visiting Villa De Leyva, then took a short 1-hour bus to Tunja.

You will need to take a bus from Tunja to Sogomoso(2.5 hours) and then a short 20 minute bus trip up the hill to Mongui.

Your hotel can arrange a guide for our hotel for our hiking tour.  (8 hours in total) It makes for a long day, but the hike is totally worth it!

Be Prepared for a Long Hike

Expect to leave early on this hike and come back around dinner time. Bring plenty of water, lunch and snacks. The weather changes constantly so pack a rain coat, something to cover your head and wear plenty of layers to change throughout the day.

For more information about hiking in Colombia check out these posts: Comuna 13: How Colombia’s Most Notorious Neighbourhood Reinvented Itself

Minca Colombia: Why You Need to Go