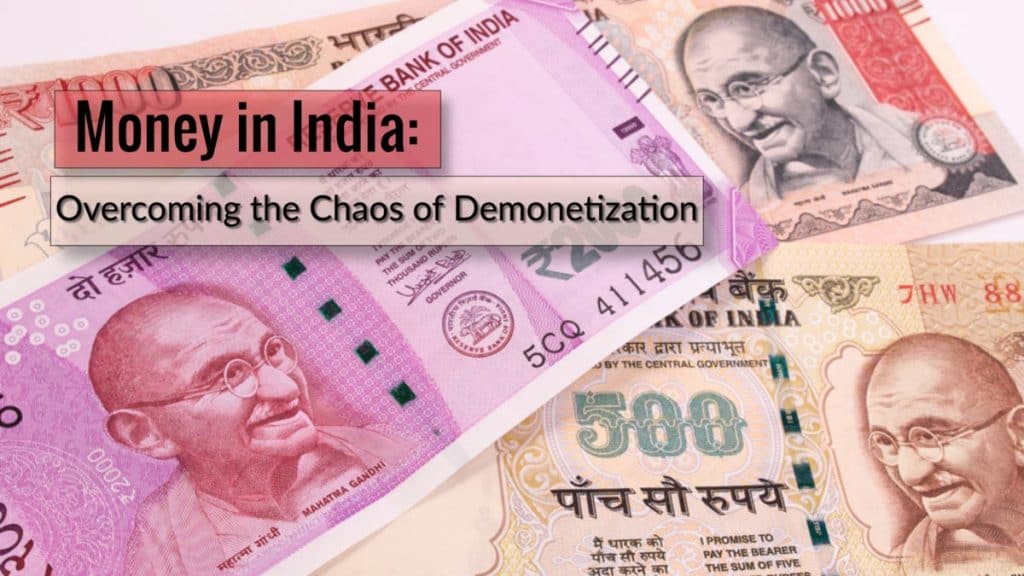 Money in India: Overcoming the Chaos of Demonetization

Tuk-tuks and shopkeepers passed by the road in front of the outdoor patio of Coffee Temple Café. It was one of our favorite breakfast spots in Varkala, a cliff-top beach village at the southwest coast of India.Troy and I finished our Masala Dosa breakfasts, a crepe-like dish rolled and filled with spicy potatoes. We sat there and lingered a little longer as we sipped on our coffees and admired the views of the Arabian Sea.  I shared my plans for the day with Troy, and we agreed that we both needed a productive morning working back at our room in the Mango Villa guesthouse.

Little did we know that the calm day was about to change.

Troy grabbed the receipt out of the billfold that arrived at our table. He reached for a 500-Rupee note from his wallet as we got up to pay at the front entrance.

The woman at the front counter said, “I can’t take this.”  “Sorry,” Troy said, “We don’t have any smaller bills.”(This is a typical challenge in India; small bills  and cash only are the norm here.)

“No!” she answered back, “didn’t you read the paper this morning? This 500-Rupee note is no longer legal!”

We looked at each other dumbfounded, while she passed over the paper. Skimming the front page, the news said:

On the evening of November 8th, Prime Minister Narendra Modi made a startling announcement just hours before this change came into effect. Money in India was about to become inaccessible.  All 500 Rupee and 1,000 Rupee notes were deemed worthless.

Of course, we had tons of questions that couldn’t be answered at that point.  And we knew we had to research this once we got back to our guesthouse.

“Can we pay with credit card then?”  Troy asked,  knowing the answer would be no, but asked anyway. He suddenly remembered that we stocked up on 500 rupee bills after a visit to the ATM two days prior. “No we don’t — cash only,” she responded

Clearly, we looked frustrated upon hearing this news for the first time, considering we also just ate a meal at Coffee Temple while unaware of this issue before we ordered our meals. After debates with the cashier were exchanged back and forth, the manager came by and accepted our note,  probably realizing this would be the only option to get paid.

This encounter was the start of several weeks of mass confusion about money in India as the government made this bold move to stop two currency issues.

This is money in India that has evaded tax and believed to be mostly tied up in real estate and gold. Its total worth is in the billions.

2. To eliminate fake currency with new and better counterfeit-proof bills.

However, EXECUTING this plan has proven to be the biggest challenge. 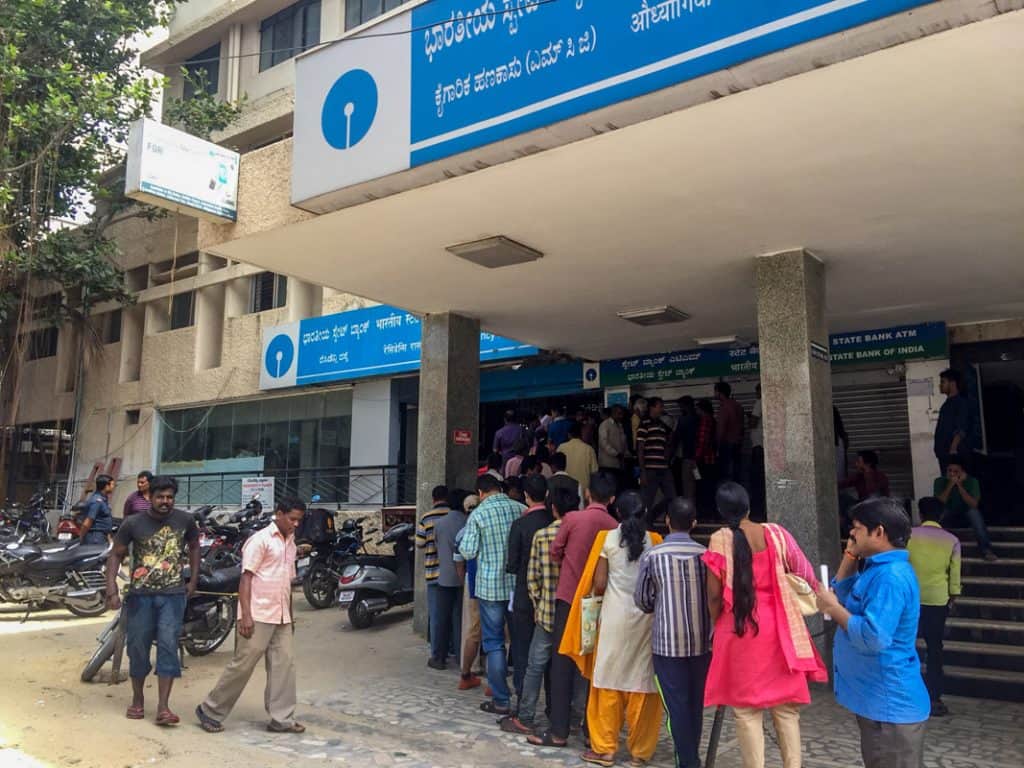 One of the hundreds of line-ups at ATMs around Bangalore

The new notes are slow to come into the market. For now, they are replaced with 100 rupee notes. As a result, there is a massive money shortage all over the country. More money is getting printed and distributed, but this is happening very slowly. ATM’s also need to be recalibrated to accept new 2000 notes. (that are smaller in size)

This change has an immediate impact for locals and tourists in India right now because:

1. A very large proportion of business transactions in India is ONLY in cash.

Cash is king. Using any other form of payment is tough. It is a cash society unlike North America, Europe or Australia. Credit card machines are expensive; banks often don’t accept foreign credit cards, and debit card banking is not the mainstay. That is not to say that these services aren’t available because they are available in larger cities. (Although India 76% of India’s population is rural)  These cards, as well as India’s PayTM – a debit system that works much like Apple Pay, is most frequently used in the main centers like Delhi, Bangalore, and Mumbai. 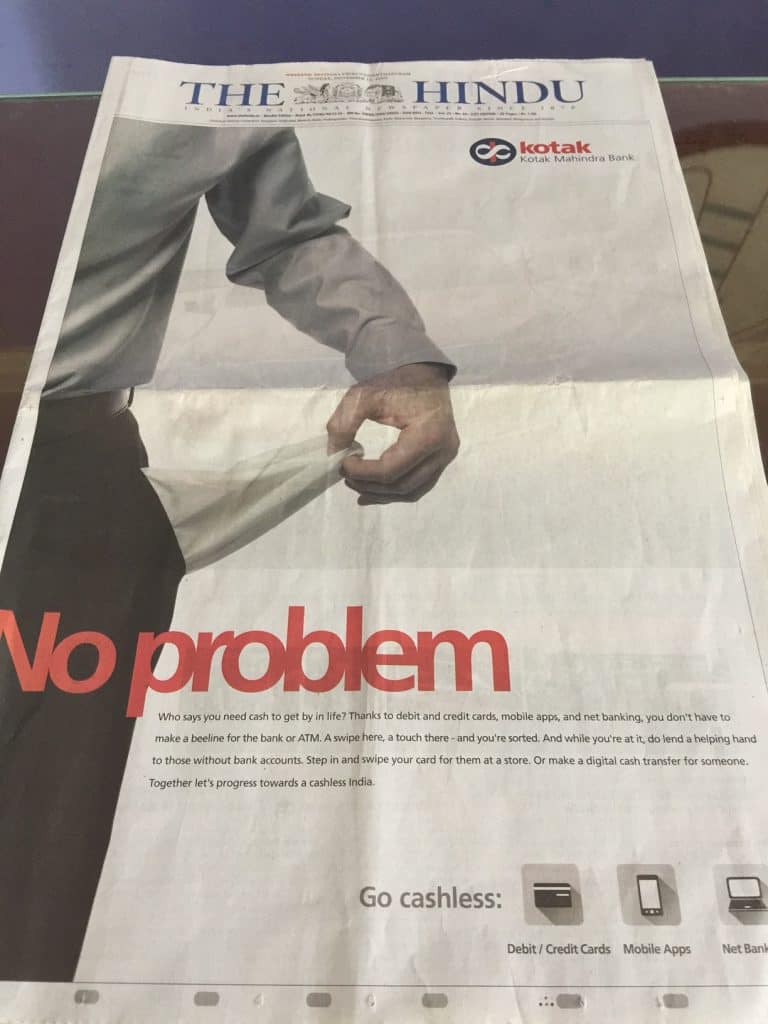 Interestingly, this move still encouraged banks to advertise their PayTM system in the national papers’ front page or full-page ads. Whenever I ask shopkeepers about its use, they would just laugh it off as though I was silly to assume this was working in their part of the country. But in a country of 1.3 billion people, India certainly doesn’t have most of these systems in smaller and remote areas. We only discovered this all too well when we visited Kerala in Southern India.

2. The second challenge is breaking larger bills into smaller denominations because most transactions involve tiny amounts of cash.

What’s even more questionable? The 1,000-Rupee bill was taken out of the circulation, only to be replaced by a 2,000-Rupee note. It was a challenge having it changed anywhere other than a western-style department store in Bangalore. 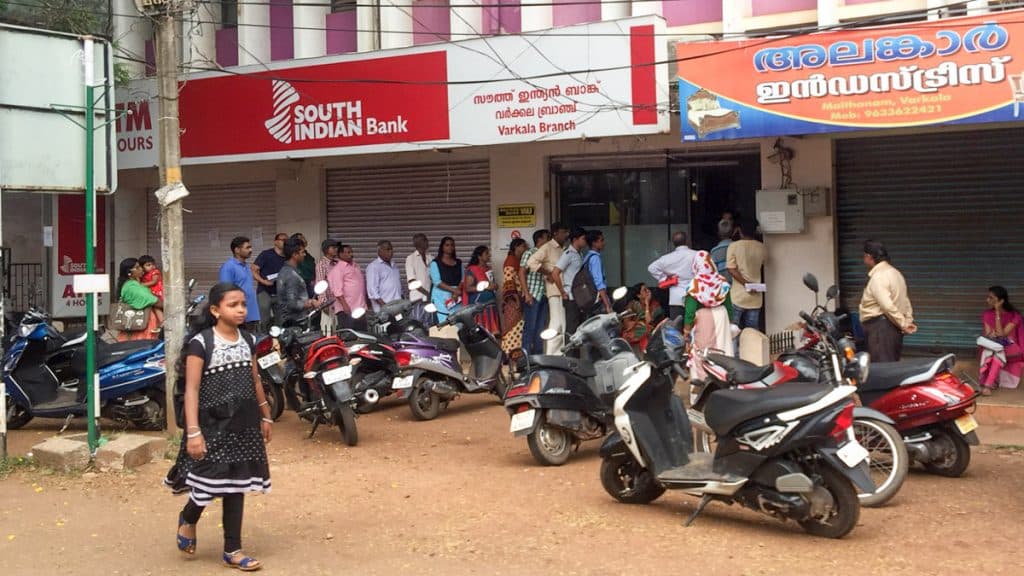 Back at our guesthouse in Varkala, we didn’t have enough cash to pay our  Cash –only guesthouse room before we checked out.

The day after the news broke, banks announced they would be accepting the 500-Rupee notes up until December 31st.  This was good news for us since it meant that our wad of notes was no longer considered invalid. Still, we needed to find exact change as much as possible (since there was a lack of supply of bills for everyone)

The extension allowed us to continue to deplete our notes quickly without issue.  We were still short on cash to pay our hotel since most banks closed to reorganize their system after this change.

The solution for our hotel: credit card payment through another business. Fortunately, the owner negotiated with her hotel friend to use his credit card machine, and subsequently, he would pay her back.

Back to our cash on hand. We still didn’t have enough money to leave Varkala and travel further south because:

Does this sound complicated?

We played ATM merry-go-round for several days in Varkala, walking from one machine to the other, in hopes of seeing lines of people, which would mean they likely had cash, but hoping by the time we got to the front; there was enough money for our 2000 Rupee ration. 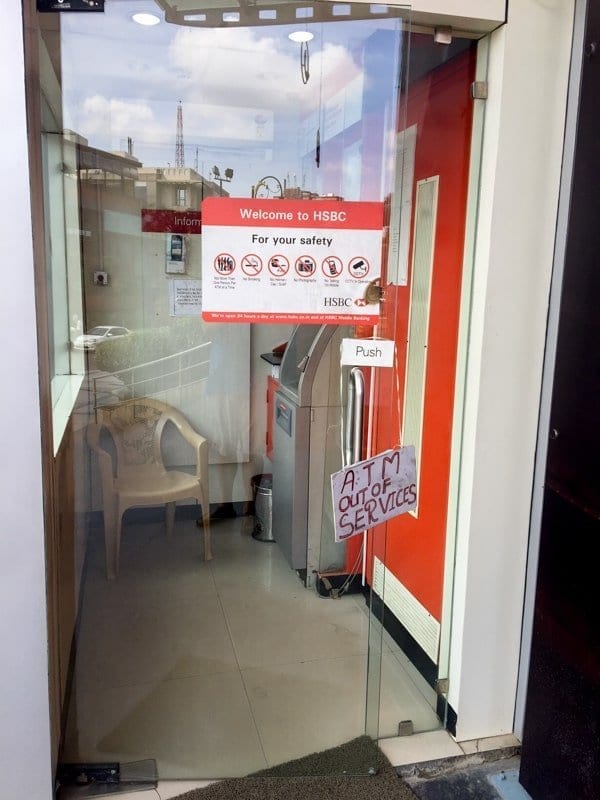 Surprisingly, we did have some fun that came out of this inconvenient and frustrating situation:

There were fun exchanges with many locals who were dealing with the same effects of the new rupee notes.

For instance, we walked out of one of the ATM rooms and said “sorry no money” to a group of locals crowding around waiting to witness some reaction about our withdrawal success. We shared a connection, each of us gesturing funny faces and gesturing “Isn’t this crazy!” with knowing looks and laughs.

Or the time when a man decided to check if his card might work instead of ours hoping that the lack of withdrawal was due to a foreign card, and was working for  Indian bank cards. He laughed as he left the ATM without any money and said: “I guess we all have the same problem!”

Let’s just say this experience has been a setback – with an impact on people in mass proportions!

Shops and vendors are feeling a big brunt of the pain. As people decide to spend their few bills on essentials. (Food, shelter – not toiletries and clothing).

We met up with two girls who decided to walk over two hours to their destination instead of taking a 15 rupee bus trip, to save their cash on ‘essentials.’

The government claims the change will take at least until the end of December. For now, we stay calm, looking for options each time we need to pay for something.

As to whether this move will stop black money and counterfeit transactions, it’s hard to say, and the news reports aren’t optimistic.

If you are are heading here, a few tips to help you get money in India

In cases where you don’t know whether an ATM has money in the machine or not:

For more resources and frequently asked questions about money in India you can find it here.

Does this change our view about India? No, we thank this country for being one of the greatest travel experiences we have had in our lifetime.

For more posts about India, you can find all our India posts here! 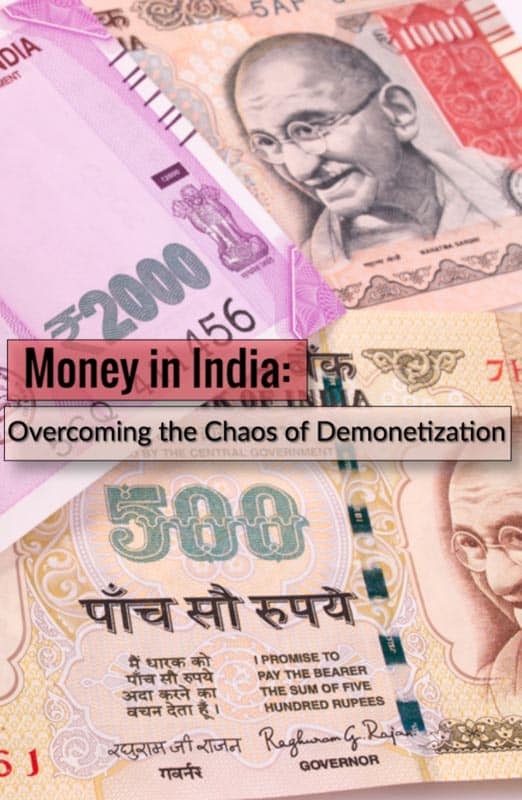 Unclutter Your Life:Tips to regain control of your house