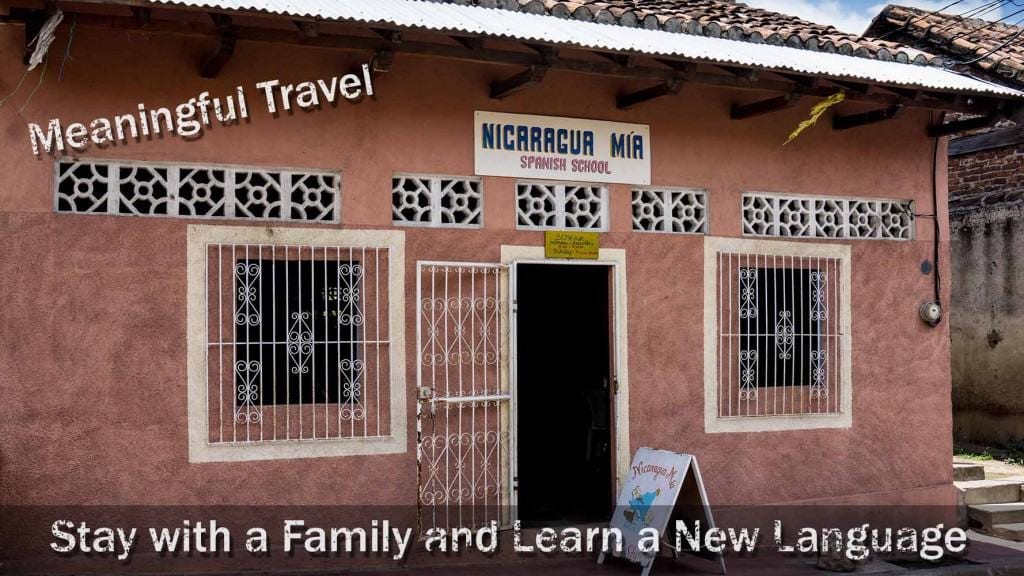 Meaningful Travel – Stay with a Family and Learn a New Language

“Mistakes are the portals of discovery.” — James Joyce

It’s human nature to want to be accurate, correct, and, let’s face it, right all the time. Being wrong often manifests into feelings of not being good enough. To avoid this from happening, we often avoid putting ourselves in situations where we’re out of our comfort zones, not in the driver’s seat and at risk of making plenty of errors and mistakes.

But what happens when we do the opposite and deliberately put ourselves into an unfamiliar learning situation?

That’s what Troy and I did in Nicaragua. We dreamed of learning Spanish for years and had been planning for it ever since our early days of full-time travel. Although we dabbled in learning the language using online language apps like Duolingo, Memrise, and Rosetta Stone, allowed us to order food in a restaurant or buy a bus ticket in Spanish speaking countries. Our words were just surface level, spoken in broken phrases.

We love traveling in South and Central American countries, but despite knowing some words, we couldn’t confidently express ourselves. The fear of saying the wrong thing often stopped us from speaking more often. More importantly, we missed out on having meaningful conversations with the local people. We’ve left countries like Ecuador, Argentina, Peru, Chile, and Guatemala, feeling short-changed, like we missed out on making meaningful connections, which is the best and most rewarding part of traveling.

Our past language failures

We spent years learning a second language that didn’t stick for either of us. As Canadians living in a bilingual country, it’s mandatory to take French until at least high school. There are two major flaws in this process. First, who wants to be forced to do anything? We were told to learn French, but, sadly, we had very limited use for it in everyday life.

Second, the school system sets us up for failure. Most of the lessons are from textbooks, focusing on grammar and accuracy with very little attention to speaking and having conversations. When we did speak, we were scolded for improper grammar, rather than receive credit for attempting to speak at all! Sadly, the French language has never been a strength, nor desire to keep up with it, for either of us.

We decided to change our approach when it came to learning Spanish, since we planned to spend a significant amount of time in Latin American countries.

However, we still had some lingering hang-ups about learning a new language. For instance, were we too old to learn a new language? We’re in our forties, and there is that perception that the older you get, the harder it is. Would our experiences of learning French affect our desire to learn Spanish?

We cast those fears aside. Our  desire to learn Spanish, AND the fact that it’s needed in non-English-speaking Central America won! 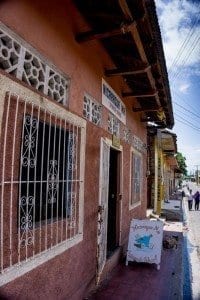 During our visit to Granada, Nicaragua, we found the Nicaragua Mia School, a well-recommended school on Trip Advisor near our guesthouse. The woman running the place spoke little English, but we managed to convey in sign language and “Spanglish” that we wanted a week of Spanish lessons with our own instructor. And, thus, we had successfully signed up for our first face-to-face, “real” language classes in at least 25 years.

The days included afternoon excursions with other students to some of the popular sites in and around Granada. We also chose to live with a local family for the week to further immerse ourselves in the language. It was a scary, uncomfortable notion for us to speak all-day and evening in a foreign language, but we both decided it would be such a rewarding opportunity.

Once we started, we were immediately transported back to being teenagers again — it was harder than we thought! We pressed the snooze button every morning, delaying another day of hard work that involved learning many new phrases and being put on the spot to listen, read, and repeat.

My teacher, Monica, fixated on perfection. At first, I was discouraged to speak when my pronunciation was criticized, but I started to relax and go with the flow. However, when Monica snapped into more grammar, I did remind her my priority to improve my speech. Troy focused on improving basic, everyday phrases with Harlen, his teacher. The lessons were at his own pace, but reminded him of high school, not his favorite years for education. 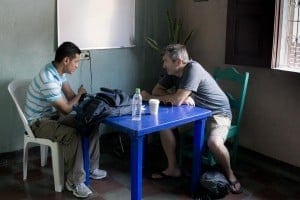 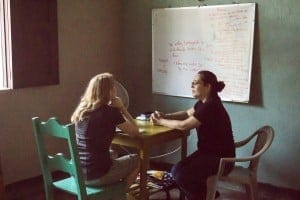 Living with a local family 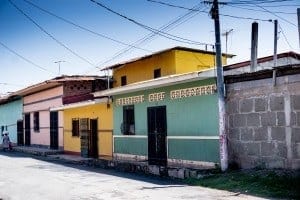 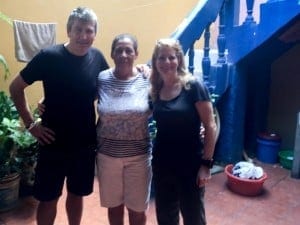 We joined the large family we were staying with for meals three times each day. Sometimes we ate in silence at the dinner table, but more often they spoke intensely and quickly. It was an intimidating experience.

The most difficult situations were when they asked us so many questions at an impossible pace for either of us to decipher a word! We often looked at each other completely dumbfounded and perplexed on how to answer. We asked them to speak slower and eventually practice allowed it to get easier.

At first, our formula for surviving the dinner table discussion was answering simple questions with muy bien, es bonita, or gracias — very good, it’s beautiful, or thank you. Then, we advanced to asking questions like, Cuantos años tus hijos (how old are your kids)? and answering their questions like, vamos al volcán Masaya después de clase (we are going to the Masaya volcano after class).

Word pronunciation was also a challenge. When we asked where the towels were on our first night, Candida our housemother laughed at our question. We soon realized that towel-as should be pronounced “Twallas!” in Spanish. Ok another correction

It was a humbling week, but a rewarding one. We felt like kids again, unsure and unconfident in our answers. As our speaking improved, we let our guards down, accepted their corrections, and often, joined in on their laughs when hearing our words and mispronunciations. We had some fun evenings, especially when Troy offered up his bottle of rum — a great way to laugh a lot more about our Spanish practice!

We loved playing with the children. They taught us new words and attempted to practice their English with us. We were somewhat of a novelty to them — these different-looking people with no kids that loved to play cards with them and read their homework. They giggled when they asked us any questions at all. 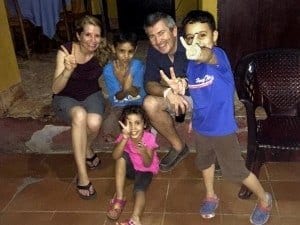 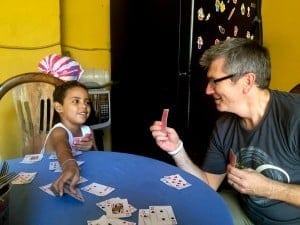 Will we do it again?

Absolutely! This homestay was the first time we connected with a family, for a length of time. We’ve stayed in homestays before, but always, someone in the group we were with spoke the foreign language.

What we learned from this incredible week

The best part of all

We are in a new location now, and we can understand and communicate with the manager of our guesthouse so much better — yes, in Spanish!

This is by no means the end, it’s just the start, and we are committed to make the attempts to speak as much as we can.

What have your experiences been with learning a new language in another country?

We would love to hear from you!

Suck it Up and Learn Spanish Already!